The primary sex organs like the testis in the males and the ovaries in the females produce gametes such as sperms and ovum by the process called gametogenesis. In the biological process of gametogenesis, diploid or haploid precursor cells divide and differentiate into mature haploid gametes. Gametogenesis can take place either through mitosis or meiotic division of diploid gametocytes into numerous gametes, Gametogenesis can be occur in mammalian testis and ovary-

The testes are situated outside the abdominal cavity within a pouch called scrotum. The scrotum helps in maintaining the low temperature of the testes . Each testis has about 250 compartments called testicular lobules. Each lobule contains one to three highly coiled seminiferous tubules that are encased in interstitial tissues.These  seminiferous tubules are the site of sperm production. The testes are covered by dense fibrous fibres known as tunica albuginea. Each seminiferous tubule is lined on its inside by two types of cells called male germ cells (spermatogonia) and Sertoli cells. 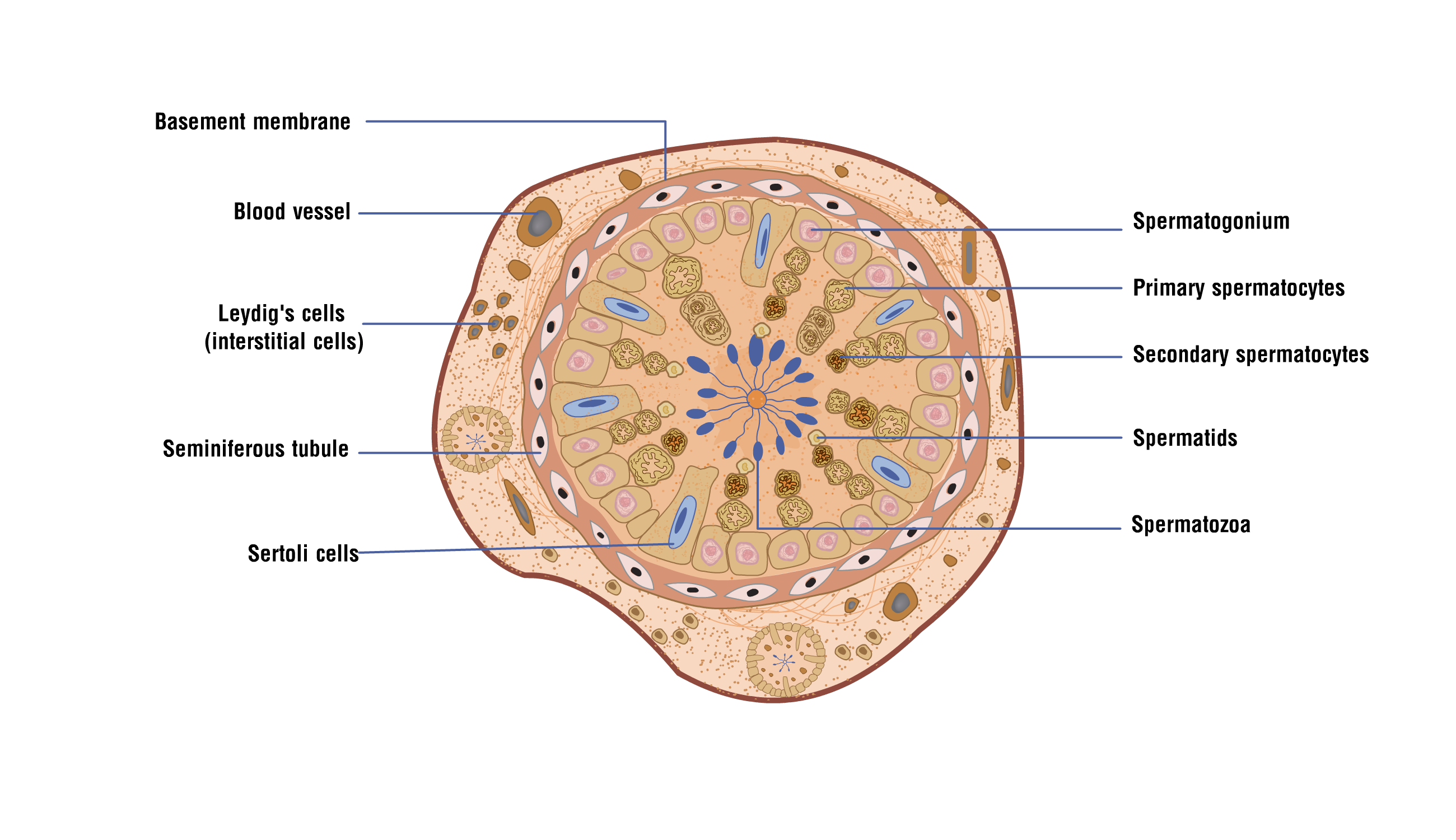 The formation of sperms in testis is occur through cell division and is shown below:

In testis, the immature male germ cells or spermatogonia produce sperms by spermatogenesis that begins at puberty.The spermatogonia found on the interior of seminiferous tubules which multiply by mitotic division and increase in numbers. Each spermatogonium is diploid and contains 46 chromosomes.

Some of the spermatogonia called primary spermatocytes periodically undergo meiosis. A primary spermatocyte completes the first meiotic division leading to formation of two equal, haploid cells called secondary spermatocytes,which have only 23 chromosomes each. The secondary spermatocytes undergo the second meiotic division to produce four equal, haploid spermatids. The process of differentiation of a spermatogonium into a spermatid is known as spermatogenesis. The spermatids are transformed into spermatozoa or sperms by the process called spermiogenesis, before they can fertilise, spermatozoa undergo an series of cellular or physiological changes like capacitation and the acrosome reaction.  After spermiogenesis, sperm heads become embedded in the Sertoli cells, and are finally released from the seminiferous tubules by the process called spermiation.

Ovaries are the primary female sex organs that produce the female gamete - ovum and several steroid hormones or ovarian hormones. The ovaries are located one on each side of the lower abdomen. The tunica albuginea is a thick layer of fibrous tissue that surrounds and serves as the boundary of an ovary, and is located inside the germinal epithelium. Each ovary is covered by these thin epithelium which encloses the ovarian stroma. The stroma is divided into two zones – a peripheral cortex and an inner medulla.  Numerous ovarian follicles, which are spherical or oval bodies, comprise the medulla. 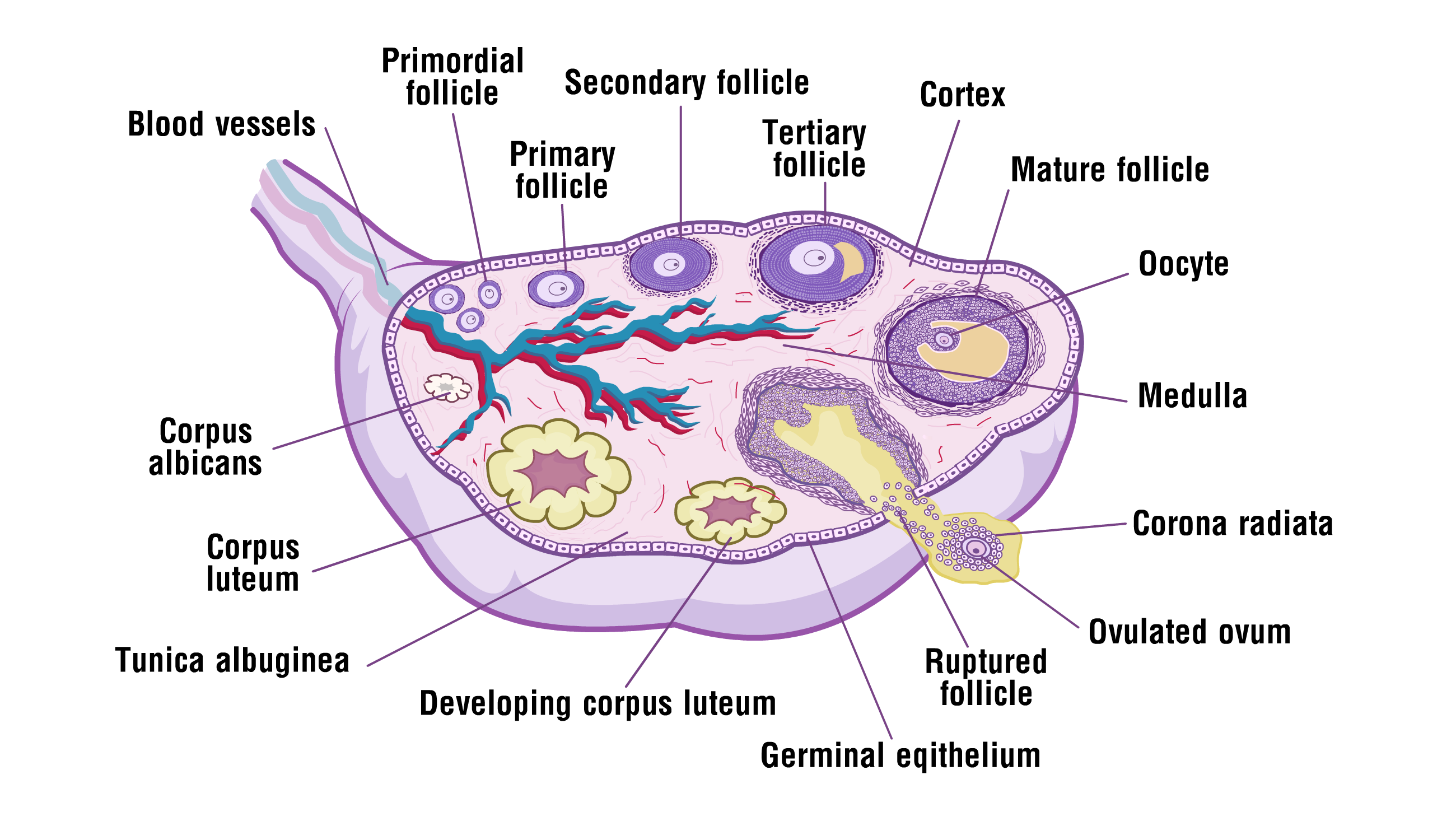 The process of formation of a mature female gamete is called oogenesis, Oogenesis begins when a few million gamete mother cells or oogonia are produced during the embryonic development stage.  The two major functions of the mammalian ovary are the production of germ cells or oocytes, and the synthesis of bioactive chemicals particularly estrogens , progestins and peptide growth factors, which are essential for ovarian function. The germ cells (oocytes) which are commonly known as primary oocytes, begin to divide, reach prophase-I of the meiotic division and get temporarily arrested at that stage. Each primary oocyte then gets surrounded by a layer of granulosa cells and is called the primary follicle. These primary follicles get surrounded by more layers of granulosa cells and are called secondary follicles. The secondary follicle soon develops into a tertiary follicle, which is characterized by a fluid filled cavity called antrum.

The following phases of folicle development occur is shown below:

The corpus luteum and mature follicles are found in the cortex. Follicle formation begins at around 16–18 weeks of fetal life. Meiosis is a process that only occurs in germ cells and leads to the development of a single haploid ovum.