A flowering plant's life cycle includes pollination. Pollination is the process of moving pollen grains from a flower's anthers to its stigma or to another flower, whether through abiotic or biotic mechanisms. Abiotic refers to the fact that the pollen is not conveyed by living things but rather by forces like wind or water. Animals, insects, and birds can all play a role in biotic pollination. Biotic pollination is the primary method used to fertilize most plants.

Pollen germination starts with the pollen grain landing on stigma. The cell of the pollen grain divides into two cells- one of these is smaller in size and called generative cell and bigger one is called tube cell. On the stigma, the germination of pollen grains begins by absorption of water and nutrients, During germination, the intine grows out through the germ pore and form pollen tube. By this time the tube nucleus degenerates and the generative nucleus divides to form two male gametes. The pollen tube bursts open and the male gametes are released –one of which then fuse with the egg cell and other nuclei with two polar nuclei.

In the flower, the pollen tube then grows towards the ovule where it discharges the sperm produced in the pollen grain for fertilization. The germinated pollen grain with its two sperm cells is the mature male microgametophyte of these plants. 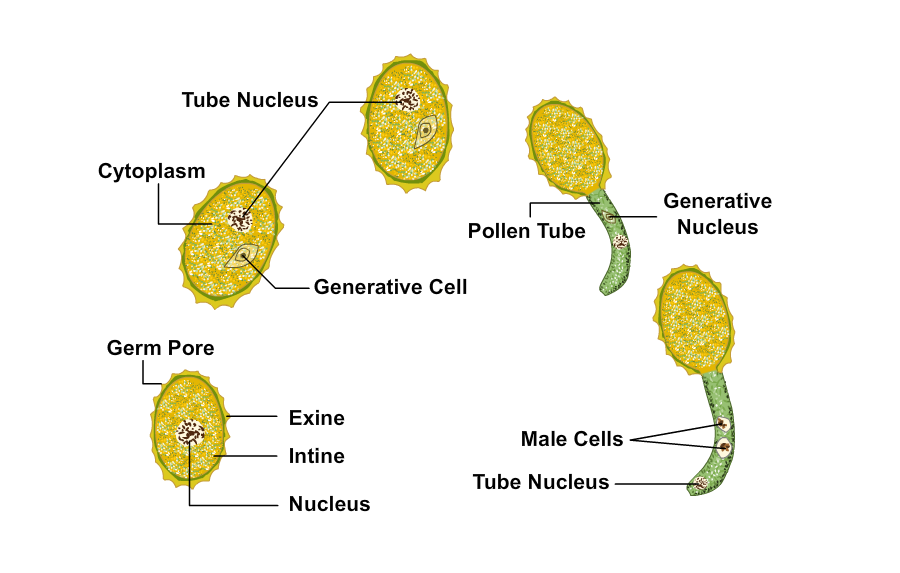