Our objective is to identify the functional groups present in an organic compound through;

Organic chemistry is the branch of chemistry that deals with the structure, properties and reactions of compounds that contain carbon. The objects of study in organic chemistry include hydrocarbon, compounds containing carbon and hydrogen and the compositions based on carbon but containing other elements. Organic compound form the basis of earthly life and their range of application is enormous. They are the main constituents of drugs, petrochemicals, paints, food, plastics, explosive materials etc.

Organic compounds contain only carbon and hydrogen are called Hydrocarbons. Hydrocarbons can be classified into two:

What does the 'Degree of Unsaturation' mean?

The number of π bonds present in a molecule of an organic compound is termed as the Degree of Unsaturation.

What does derivatives of hydrocarbons or families mean?

The compounds that are derived from hydrocarbons by replacing one or more hydrogen atoms by other atoms or groups of atoms are called derivatives of hydrocarbons or families.

What are functional Groups?

The atom or group of atoms that replaces hydrogen atoms from hydrocarbon are called functional groups. They may be –OH, -COOH, -CO, -CHO, -Cl, -COCl, -COOR etc. Functional groups are responsible for the characteristics of a molecule. 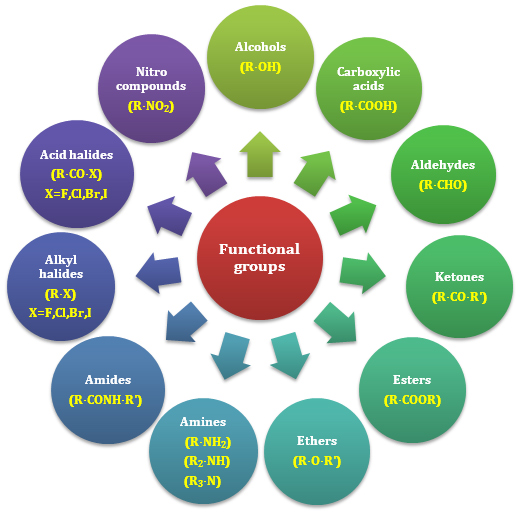 Let’s discuss some important functional groups and their identification tests.

There are two tests for determining unsaturation in an organic compound.

In this test, the orange-red colour of bromine solution disappears when it is added to an unsaturated organic compound (unsaturated hydrocarbon). 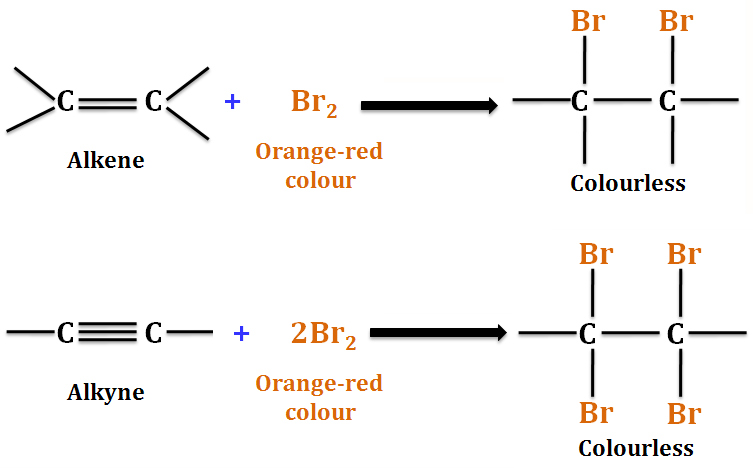 In this test, pink colour of KMnO4 disappears, when alkaline KMnO4 is added to an unsaturated hydrocarbon. The disappearance of pink colour may take place with or without the formation of brown precipitate of MnO2.

Alcohols are further classified as primary (1°), secondary (2°) and tertiary (3°) according to the –OH group is attached to the primary, secondary and tertiary carbon atoms respectively.

The alcoholic group can be detected by the following tests:

Alcohols react with active metals like sodium and liberate hydrogen gas that can be observed in the form of effervescence.

This test is given by acetaldehyde, all methyl ketones and all alcohols containing CH3-CH-OH group. When alcohol is warmed with sodium hydroxide solution and iodine, a yellow precipitate of iodoform is formed.

Phenols are compounds containing a hydroxyl group attached to an aromatic ring. The simplest phenol is C6H5OH that is solid in winter and liquid in summer. Phenols are generally colourless but are coloured when it comes in contact with air due to oxidation. Other examples of phenols are: o-cresol, m-cresol, p-cresol, quinol, catechol, resorcinol etc. 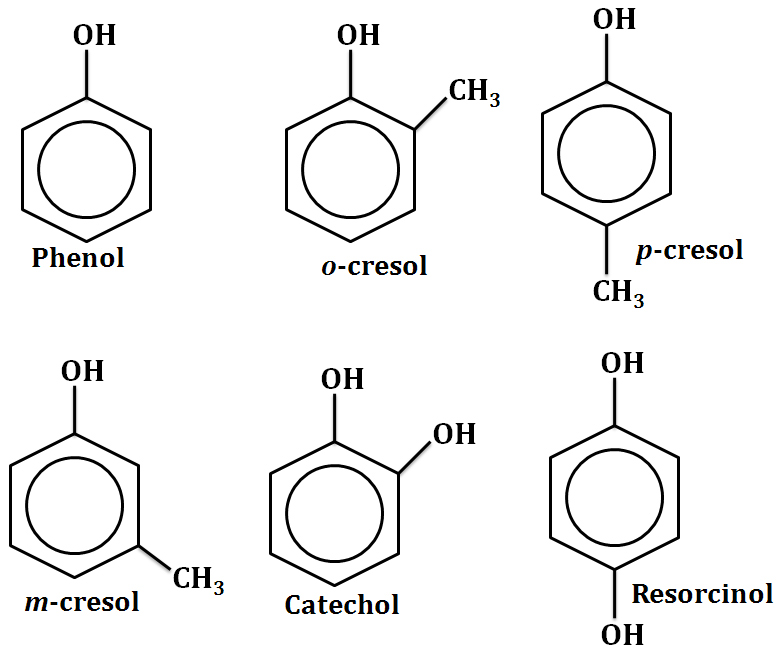 The phenolic group can be detected by the following tests:

Phenol is a weak acid, it gives red colour with litmus paper. The dissociation of phenol in water is represented as follows: 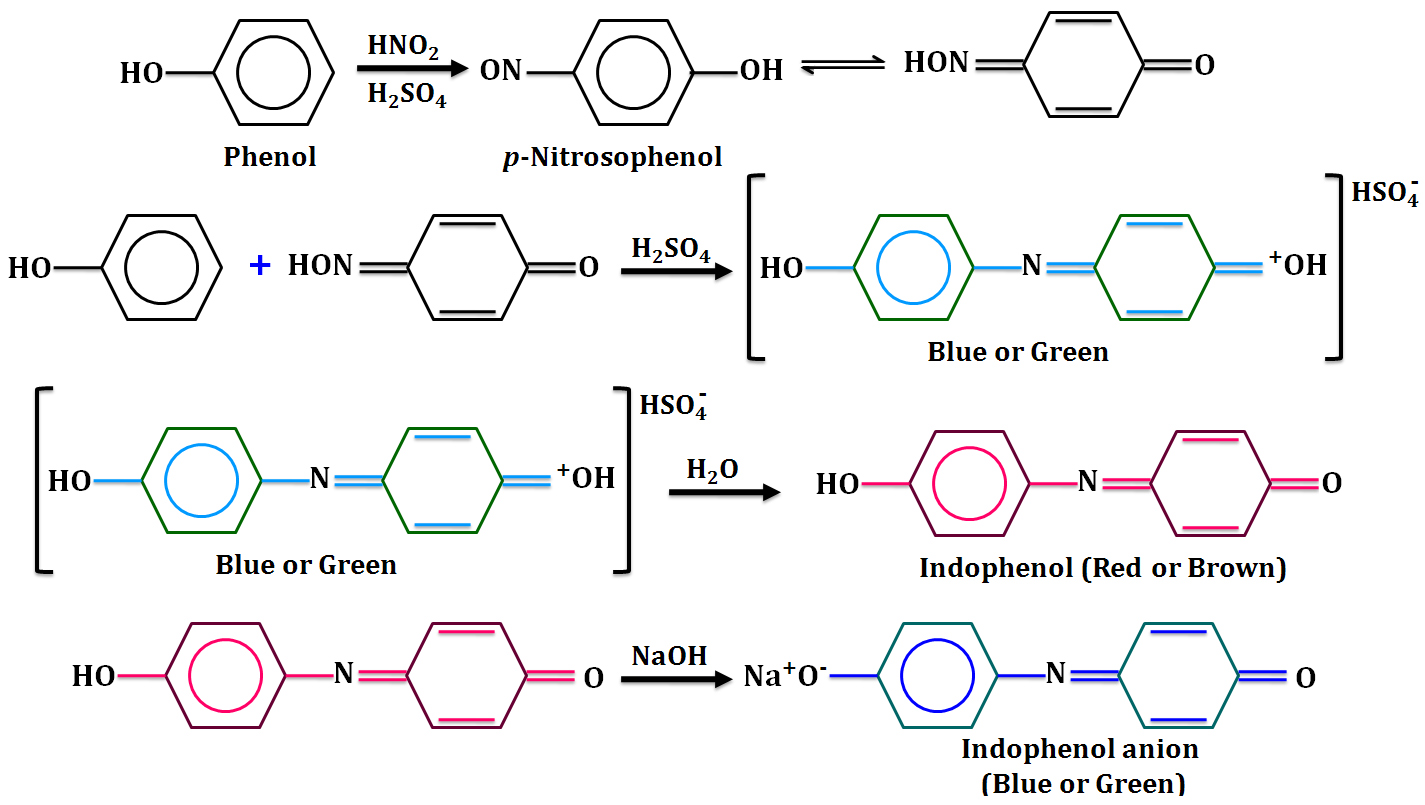 Phenol on heating with phthaleic anhydride in the presence of sulphuric acid produces phenolphthalein, which is colourless. Phenolphthalein gives pink colour on treating with alkali.

Tests for Aldehydic and Ketonic Groups

Aldehydes and Ketones are compounds containing carbonyl group. Carbonyl group consisting of a carbon atom bonded to oxygen atom by a double bond.

But in ketones the carbonyl carbon is attached to two aliphatic or aromatic groups.

Carbonyl groups in aldehydes and ketones are identified by the following tests:

Most aldehydes and ketones give bisulphate addition product with sodium bisulphate, which is white crystalline in nature. 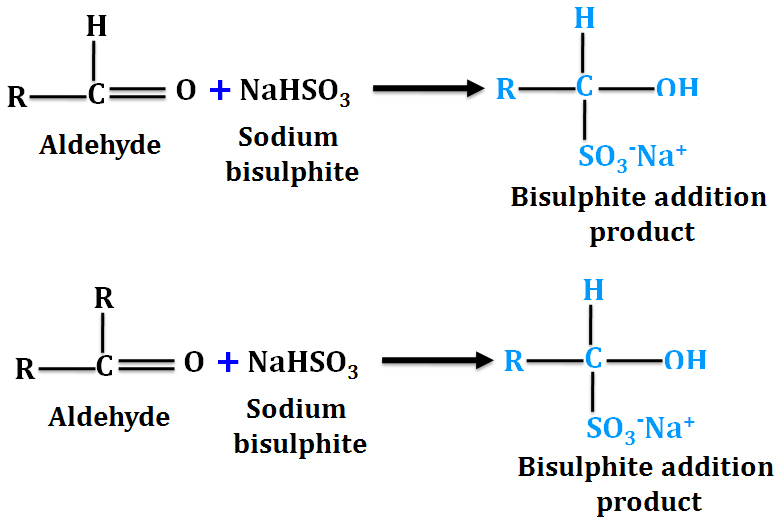 Note: Acetone phenone and benzophenone do not give this test.

The following are the tests for aldehydes but not for ketones:

Aldehydes give pink or magenta colour with Schiff’s reagent.

Note: Benzaldehyde may or may not give this test as the reaction is very slowly.

The following tests are given by ketones but not by aldehydes:

Ketones react with m-dinitrobenzene to give a violet colouration.

The anion of the keton formed by a alkali reacts with nitroprusside ion to form a red coloured complex.

The following tests can be used to identify carboxylic acids:

Carboxylic acids reacts with sodium hydrogen carbonate to produce carbon dioxide gas which can be seen in the form of a brisk effervescence.

Carboxylic acid reacts with alcohol in presence of conc. sulphuric acid to form ester that is identified by the presence of a fruity smell.

Amines are derivatives of ammonia in which one or more hydrogen atoms are replaced by alkyl or aryl groups.

When one of the three hydrogen atoms is replaced by alkyl or aryl group, primary amine is formed. It is generally represented as RNH2.

When two of the three hydrogen atoms are replaced by alkyl or aryl group, secondary anime is formed. It is generally represented as R2NH.

When all the three hydrogen atoms are replaced by alkyl or aryl substituents, tertiary amine is formed. It is generally represented as R3N. 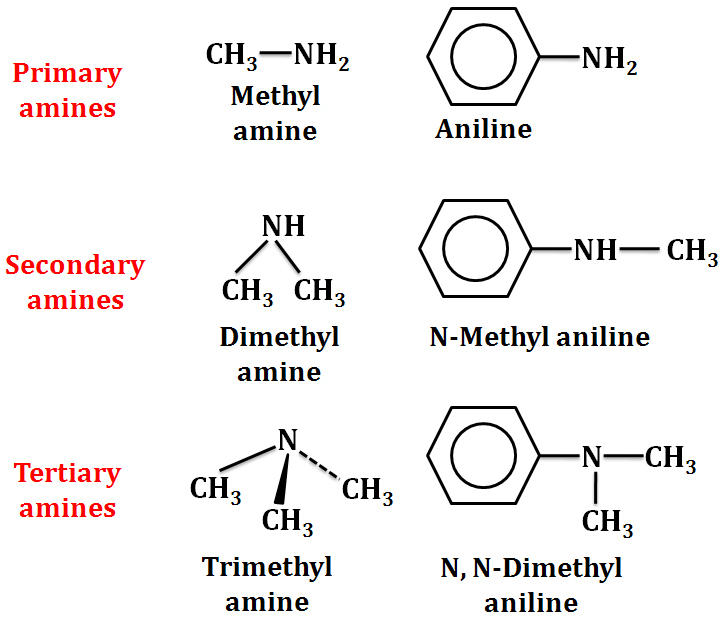 Amines are basic in nature and dissolves in mineral acids.

Amines are basic in nature and turns red litmus blue.

When primary amine is treated with alcoholic potassium hydroxide and chloroform, an offensive smelling isocyanide is formed. 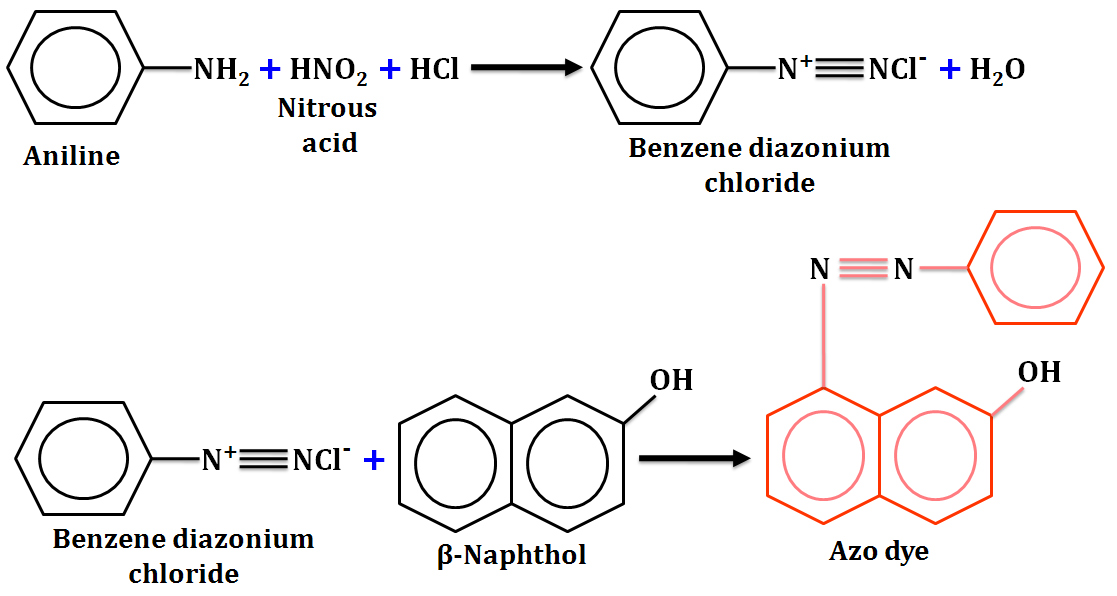 Primary aliphatic amines react with nitrous acid to produce nitrogen gas which is seen as bubbles.

The reactions of primary, secondary and tertiary amines are as follows. 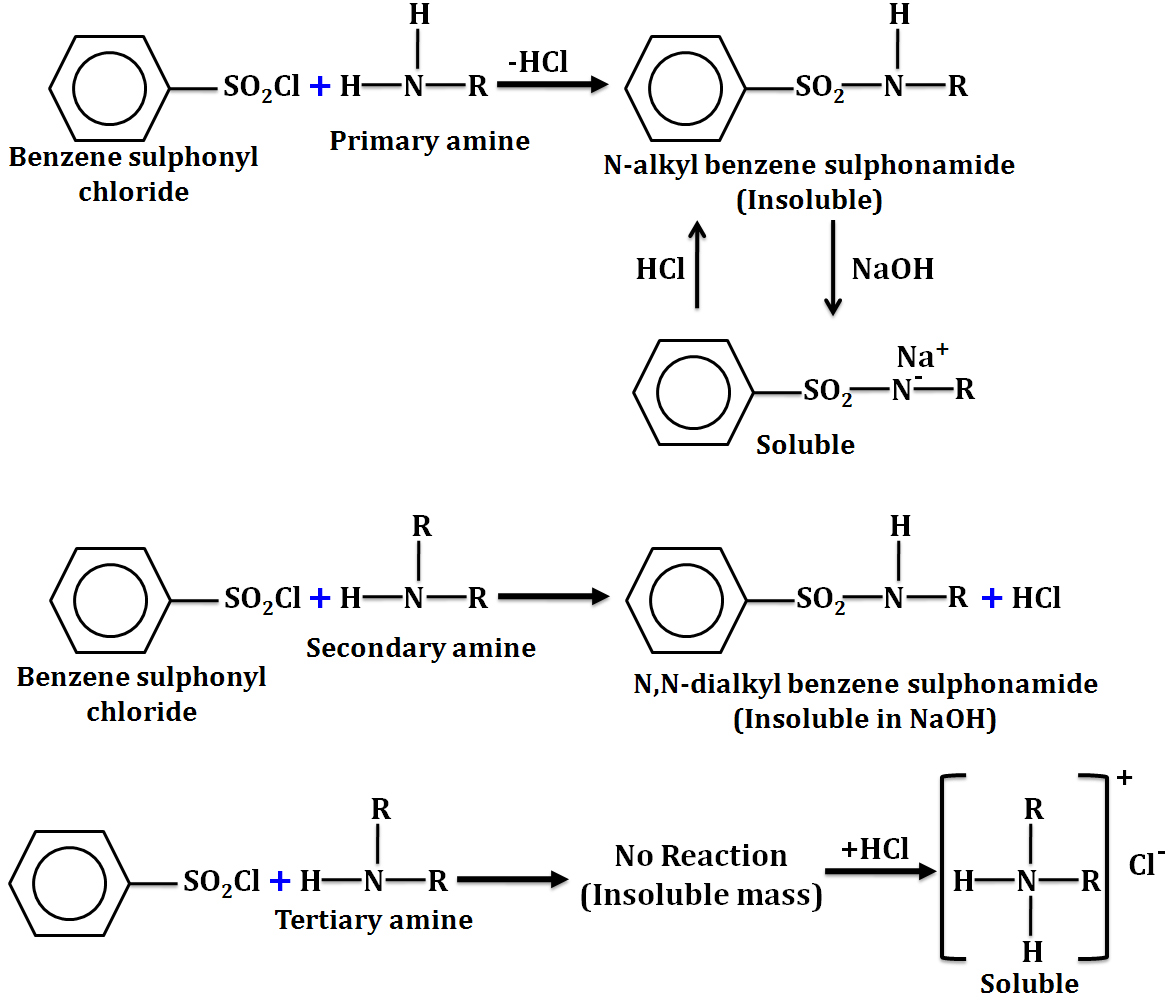