Compare the foaming capacity of soap from a given set of sample and measure its length.

Soap's foaming ability is determined by the soap's composition and concentration. Equal volumes of solutions from various samples with the same concentration can be compared by shaking them with the same force for the same period of time. The solutions are then allowed to sit until the froth created during shaking has dissipated. The amount of time it takes for the foam to vanish in each sample is calculated. The longer it takes for the foam to vanish in a given sample of soap, the greater its foaming capacity or cleaning activity.

Soap is an anionic surfactant that is used to clean and wash with water. It's often sold as solid bars or a sticky liquid. Saponification, or the interaction of common oils or fats with strong alkalis, produces sodium or potassium salts of fatty acids, which are used in soap. The lipids are hydrolyzed by the base, which produces alkali fatty acid salts (crude soap) and glycerol. Soap molecules have a hydrophilic end that dissolves in water and a hydrophobic end that dissolves non-polar grease molecules, making them ideal cleaning agents. The foaming capacity of different soap samples may be evaluated by measuring the quantity of foam formed by an equivalent amount of various soap samples.

The cold process method, in which fats like olive oil react with an alkaline solid solution, is the most used soap-making method today. Simultaneously, some soapers employ the traditional hot process. In this way, handmade soap varies from industrial soap. In most cases, an excess of fat is used to consume the alkali (superfatting). Glycerin isn't eliminated, so you're left with a naturally moisturising soap rather than a pure detergent. Emollients like jojoba oil or Shea butter are frequently used 'at trace.' The majority of the oils are saponified so that they do not react in the final soap.

Soap can be made from vegetable or animal fats. Many soaps contain sodium tallowate, which is made from rendered cow fat. Vegetable oils, such as palm oil, can also be used to make soap, which results in a softer product. To give varied properties, a variety of saponifiable oils and fats are utilised in the process, including olive, coconut, palm, and cocoa butter. Olive oil, for example, is gentle in soap; coconut oil produces a lot of foam; and coconut and palm oils are hard. Castor oil is also often used as an ebullient. For extra advantages, small quantities of unsaponifiable oils and fats that do not create soap are occasionally added.Soap manufacturing Heat may be necessary for saponification in both cold-process and hot-process soap manufacturing. Cold-process soap is made at a temperature high enough to assure the liquification of the fat utilised. Because the alkali and fat saponify more quickly at the higher temperatures employed in hot process soap manufacturing, hot-processed soap may be used immediately away, unlike cold-processed soap. When the quality of alkali was questionable, hot-process soap was utilised. To guarantee that the finished product is mild and skin-friendly, cold-process soap involves precise measurements of alkali and fat levels, as well as determining their ratios using saponification charts.

The hot-process technique involves boiling alkali and fat together at 80–100 °C until saponification occurs, which the soap maker may detect by taste or sight. The soap is occasionally precipitated from the solution after saponification by adding salt, and the surplus liquid is drained off. After that, the hot, soft soap is spooned into a mould.

A cold-process soap maker uses a saponification chart to determine the saponification value of the fats being used, which is then used to calculate the right quantity of alkali. A soap with too much unreacted alkali will have an extremely high pH, which can burn or irritate the skin. There isn't enough alkali in the soap, and it's oily. Water is used to dissolve the alkali. If the oils are solid at normal temperature, they are then heated or melted. Both compounds can be blended once they have cooled to around 100-110°F (37-43°C) and are no more than 10°F (5.5°C) apart. Stir the alkali-fat mixture until it reaches "trace." Trace is available in a variety of forms. The liquid thickens to the consistency of a thin pudding after considerable stirring. 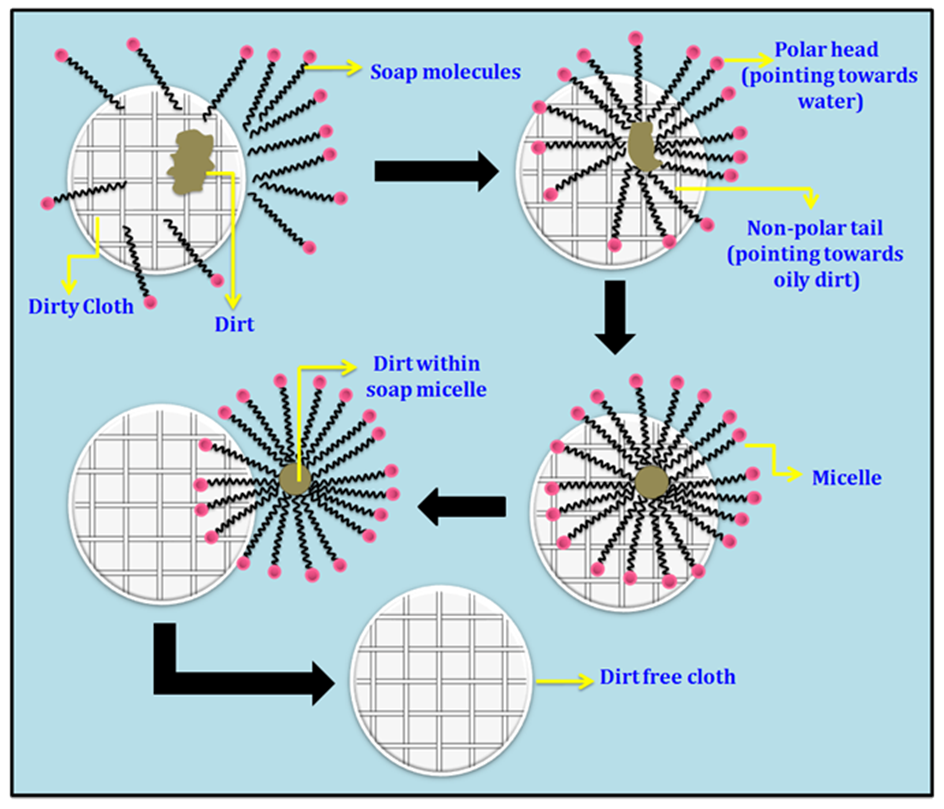 Forming Capacity of the Soap Can be Measured?

The foaming capacity of a soap sample is determined by the soap's type and concentration. This may be compared between different soap samples by shaking the same concentration of solution. The foam is created, and the time it takes for it to vanish in each scenario is compared. The smaller a solution's foaming capacity is, the less time it takes for foam to evaporate.