A spherometer works on the principle of the micrometer screw. It is used to measure either very small thickness of flat materials like glass or the radius of curvature of a spherical surface thus getting its name. 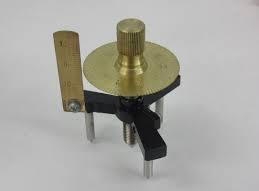 A spherometer consists of a metallic tripod framework supported on three fixed legs of equal lengths. A screw passes through the centre of the tripod frame, parallel to the three legs. A largeP)circular disc graduated with 100 equal parts is attached to the top of the screw. A small vertical scale known as the Pitch scale (P) with the scale reading divided into millimeters is fixed at one end of the tripod frame.

Thickness of a Glass Strip

The thickness of a glass strip  can be represented by;

Where, 'n' is the number of complete rotation made by the circular disc.

'P' is the pitch, which is the distance moved by the middle screw per revolution.

'x' is the number of additional circular scale divisions in excess of complete rotations.

'L.C' is the least count of spherometer.

Least Count of the Spherometer

If there are N divisions in the circular scale on the circumference of the disc then;

Measuring the Radius of Curvature of the Concave Surface

, the height of central screw above the plane ABC, which is measured by the spherometer (h is called Sagitta.) 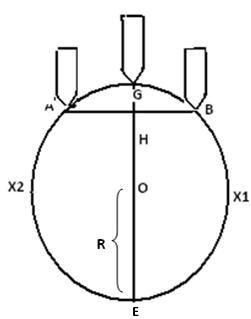 where 'l' is the distance between  any of the two legs.