To study the effect of amplitude on the time period of a simple pendulum.

A simple pendulum consists of a small object made of a heavy metallic sphere, called the pendulum bob, suspended by a light inextensible thread from a fixed and rigid support. 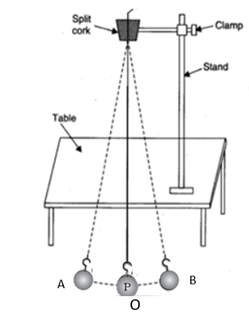 The position of the bob of the freely suspended pendulum at rest is called its mean position, O. When the bob P is released after taking its free end P slightly to one side (say to point A), it crosses the point O, goes to the other side (say to point B) and returns constituting a two and from motion about the point O. This two and fro motion of a pendulum bob along the same path passing through the mean position is called oscillatory motion. A complete to and fro motion constitute 1 oscillation. The time taken by the pendulum to complete one oscillation is called its time period whereas the number of oscillations made by the pendulum in one second is called its frequency of oscillation. The unit for frequency in the SI system is the hertz (Hz).

The distance between the point of suspension S and the centre G of the spherical bob is defined as the effective length of the pendulum, L as shown in figure

l - the length of the thread,

r - radius of the pendulum bob

As the motion of the pendulum repeats itself, it is an example of periodic motion. A swing in the park also has a similar motion.

Energy of the simple pendulum

A simple pendulum at rest will be in its mean position O, also known as equilibrium position. As the bob is displaced to one side to a point A, it acquires gravitational potential energy (due to a change in its height from its initial position). The kinetic energy of pendulum bob at point A is zero as the bob is at rest. When we release the pendulum bob, it tries to regain its equilibrium position. The velocity of the bob goes on increasing and becomes maximum at the mean position, O. At this point, the pendulum will have maximum kinetic energy. The bob then continues its path due to inertia of motion, goes to the other extreme end until its velocity becomes zero again (point B). The kinetic energy is now completely converted to potential energy. The pendulum thus swings back and forth with its energy continuously changing between kinetic and potential. The total energy remains constant throughout the oscillation with maximum kinetic energy at the mean position and maximum potential energy at the extreme position. It can be clearly observed that the simple pendulum obeys law of conservation of energy. 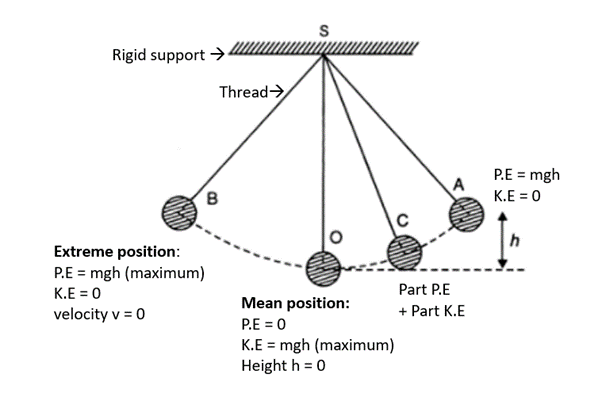 The force responsible for maintaining the oscillations in the simple pendulum is called the restoring force. Practically the amplitude of oscillation decreases with time. Thus the pendulum will not keep on oscillating for a long time. This happens because the pendulum losses its energy in overcoming friction and air resistance.

An interesting application of the pendulum is the pendulum clock. Pendulums were used to keep track of time in the past until the early 1900s. You might have seen an antique grandfather clock with a pendulum swinging back and forth at exact time intervals. Even when the amplitude of the simple pendulum changes, it takes the same amount of time to complete one oscillation. It will be interesting to note that in most cases these clocks had their pendulum bob in glass cases to reduce the effect of air resistance. Nowadays, pendulum clocks have been replaced by quartz clocks. Some of you might have noticed quartz written on your wristwatches.

In this experiment, the effect of amplitude, length and mass of the pendulum on its time period will be observed.