To understand the concept of net force.

A force is a push or pull on an object. It is a consequence of interaction between two objects and usually results in some change in the state of motion of an object. Actions like picking, opening, shutting, kicking, hitting, lifting, flicking, etc., are the different ways in which you can apply strength or energy to the object. Each of these actions can be grouped as a pull or a push or both.

When something is pushed, it moves in the direction of the push. The harder you push, the further the item moves away from you. Pulling is a similar action where you hold and move someone or something in a particular direction and especially toward yourself. A force can range from being extremely weak to being extremely strong. You only need to apply small muscular force in lifting your pen from the table. Meanwhile, you must exert a lot of energy and strength or apply a large force in order to move a heavy box.

The effect of forces on an object: 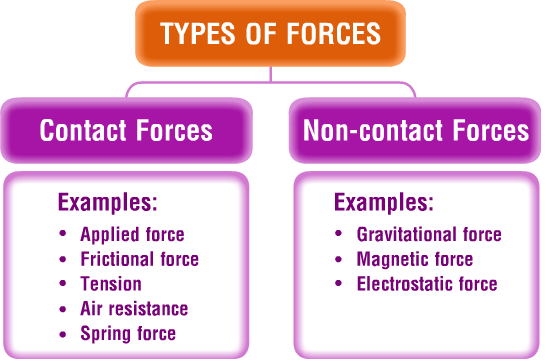 The forces that act between two objects at a distance are non-contact forces. Such forces occur when an object is able to push or pull another object even when they are not in contact with each other. Some examples of non-contact forces are:

A force could be larger, smaller than the other or equal to each other. In case the forces acting on the opposite directions are equal, then the net force on an object is zero. This is known as a balanced force. Such an object remains at rest or continues to move with a constant speed. It is the unbalanced force that makes an object move or increase its speed.

The strength of a force is usually expressed by its magnitude. We have also to specify the direction in which a force acts. If the direction or the magnitude of the applied force changes, its effect also changes. The force is measured in a unit called the newton, which is abbreviated as "N". In science, forces are usually represented by arrows. The direction of the force will be shown by an arrow in that same direction.