Identify the parts of a flower and distinguish between unisexual and bisexual flowers.

Study on unisexual and bisexual flower

Hibiscus is a genus of flowering plants in the Malvaceae family. The flowers are large, trumpet-shaped, with five or more petals, color from white to pink, red, blue, orange, yellow etc. 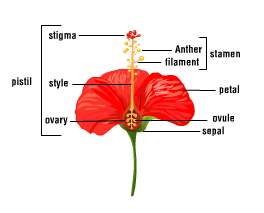 Sepals (collectively called the calyx) are modified leaves that enclose the developing flower. The green sepals protect the bud of the flower.

Every flower has multiple petals, which differ in color depending on the species. The colorful petals attract animals and insects. This attraction helps ensure the pollination of the flower. The bees and the animals (birds) are called the pollinators and they help to transfer the pollens to the stigma and this process is called pollination.

The pistil is a long tubular organ that is a female part of the flower; its function is to produce seeds. The pistil consists of the ovary, stigma, and style.

The stigma is where pollen is collected and is present at the top of the pistil. In the middle is the style. This is the section where the pollen travels down to the ovary.

The ovary lies at the bottom of the blossom. In some flowers there are several ovaries, but the hibiscus has just one. After fertilization (pollen travels down to meet the ovules (eggs), the ovary develops to become the fruit and the ovule develops to a seed.

The male part of the flower is the stamen and is responsible for producing pollen.

Anthers are two tube-shaped objects that release pollen. Anther is mostly found yellow in colour. Anthers sit on a long thin tube called a filament. Together, these organs make up the male part of the flower known as the stamen. Some flowers have a few stamens, but the hibiscus flowers have hundreds.

The flowers are bisexual, irregularly shaped, and from Fabaceae family.

In cassia, five sepals are present, each of which is free and can be detached. It contains 5 separate petals which make up the Corolla. There are ten stamens, each of which is polyandrous (the stamens of a flower are free) and unequal. This flower's ovary is superior and monocarpellary (ovary with one carpel with the floral parts)

These Flowers are zygomorphic flowers that can be divided into two halves from one plane. 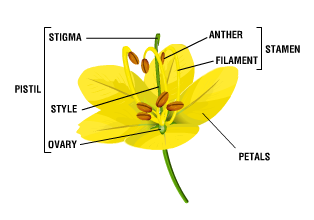 Petunia is a bisexual flower composed of petals, sepals, androecium and gynoecium.

Petals and sepals have a protective function, helping to shield the two inner rings of flower parts. Petals also serve to attract pollinators.

Androecium is the term used to refer to the male parts of a petunia, the stamens. Stamens create pollen. Each stamen has two parts. At the top is the anther, which is roughly shaped like a capsule. These are the sources of pollen. Holding the anther aloft is a stem like structure called the filament.

The gynoecium is the female reproductive part of the petunia. Eggs await pollination deep within these organs. 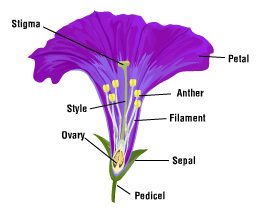 Papayas are dioecious (having male reproductive organs in one individual and female in another). The male flowers have the stamens fused to the petals. The female flowers have a superior ovary and five contorted petals loosely connected at the base. 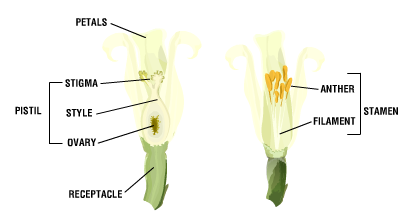 The plants are diecious and also monoecious cucurbitaceae plant with medium size climbing vines with thin stem and tendrils. Staminate flowers are small, yellow and borne on long slender pedicels. The pistilate flowers are solitary, have small pedicel and are easily distinguish by oblong to long distinct green colour ovary.

There are 5 calyx (sepals) and 5 corolla (petals). Stamens are 5 in number with free filaments and united anthers. 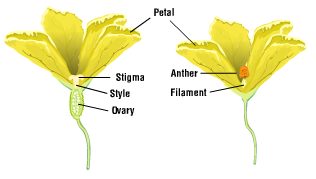 Pumpkin flowers are large orange or yellow-colored blooms that grow on long vines and produce pumpkins. There are 5 calyx (sepals) and 5 corolla (petals).

These flowers are unisexual flowers that contain either male or female flowers. Staminate flowers (male flowers) contain a male reproductive part which is an anther and filament collectively called the stamen. They are small, yellow and borne on long slender pedicels.

The pistillate flowers (female flowers) contains stigma style and ovary collectively called as pistil. They are solitary, have small pedicels, and are easily distinguished by oblong to the long distinct green colour ovary.