To detect the presence of urea in the given sample of urine.

Urine is a liquid produced by the kidneys to remove waste products from the bloodstream. Human urine is yellow in color and contains various chemical components. It primarily consists of water, organic substance such as urea, uric acid, trace amounts of enzymes, carbohydrates and hormones. The handling of urea by the kidneys is an important part of mammalian metabolism.

Let’s see how urea is produced in our body.

Urea is present mainly in the urine of all mammals, but it also occurs in blood, bile and milk. Urea is naturally produced during the process of breakdown of proteins. Due to this process, amino groups are removed from the amino acid present in the proteins. These amino groups are converted to highly toxic ammonia (NH3), and the ammonia thus produced is finally converted to urea by the liver. The urea thus formed then passes to the kidneys and is finally excreted from the body through the urine. 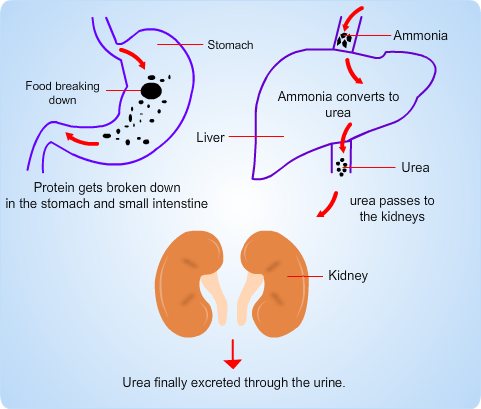 A healthy adult person normally excretes about 15g of nitrogen per day. Among this, about 95% of this nitrogen is excreted as urea through urine. If the liver is not healthy, it may not efficiently break down proteins. Similarly, if the kidneys are not healthy, they may not properly filter urea. Either of these problems leads to changes in the amount of urea nitrogen in our body.  If the urine is kept exposed to the atmosphere, it splits and ammonia gets released due to bacterial activity. Due to this process the stored urine becomes alkaline.
Generally urease tests are used to detect the presence of urea in the urine sample. The enzyme urease decomposes urea into ammonia and carbon dioxide. On adding an alkaline substance, ammonium carbonate to it, changes the slightly acidic urine to an alkaline solution.  The colour of phenol red indicator changes from yellow to red in this reaction mixture.