Study of the life cycle of malarial parasite (Plasmodium).

Malaria infection begins when an infected female Anopheles mosquito bites a person, injecting Plasmodium parasites, in the form of sporozoites, into the bloodstream of human beings. The sporozoites pass quickly into the human liver and they starts multiply asexually in the liver cells over the next 7 to 10 days, which causing no symptoms of any diseases.

The sporozoites parasites multiplies in the form of merozoites and are released from the liver cells as vesicles which passes through the heart and finally reach in the lungs, where they settle within lung capillaries. Eventually, these vesicles disintegrate apart, allowing the merozoites to go to the blood stage of their development.

When a mosquito bites an infected human, these gametocytes enter into a fresh mosquito, which develop further into mature sex cells called gametes.The fertilized female gametes develop into actively moving ookinetes that burrow through the mosquito's midgut wall and form oocysts on the exterior surface.

Inside the oocyst, thousands of active sporozoites  develop. Eventually, Oocyst ruptures to release sporozoites which migrate to the salivary gland of mosquito.  When this mosquito bites a healthy human being, the sporozoites enter into his body.  The cycle of human infection begins again when the mosquito bites another person. 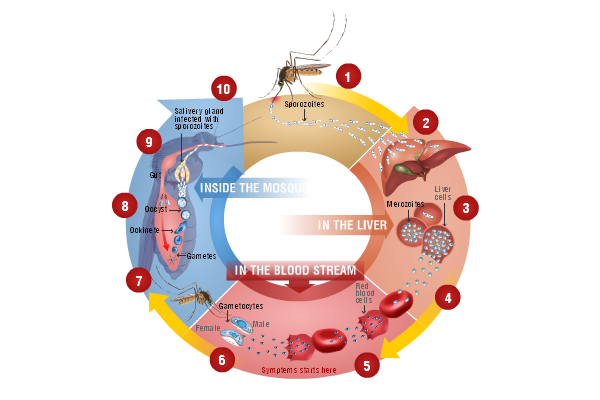