Our objective is to study the external features of Monocot and Dicot plants.

Flowering plants, also known as Angiosperms, are the most diverse group of land plants in the world, with at least 2,60,000 living species classified into 453 families. (The word Angiosperm finds its origin from two Greek words – ‘angio’ meaning covered and ‘sperma’ meaning seed.)   Angiosperms are divided into two groups- monocots and dicots.

Monocot and dicot plants have specific characteristics. We identify plants by looking at their external characteristics such as seeds, roots, leaves, flowers, pollen, stems and vascular bundles.  Based on the differences, they are placed in one of these two groups.

Comparison between Monocot and Dicot Plants

There are some specific characteristics that help us identify the plant as a monocot or a dicot. Let us look at them.

Plant embryos in seeds have structures called cotyledons. A cotyledon is the central portion of a seed embryo to which the epicotyl (immature shoot) and radicle (immature root) are attached. The number of cotyledons differs in these two groups of plants and that forms the basis for the main classification of monocots and dicots.  A seed of a monocot plant has one cotyledon and that of a dicot plants has two cotyledons.   (Note: This is easy to remember when you know mono=one and di=two).

Roots can develop either from a main radicle that is one large taproot with many small secondary lateral roots growing out of it, or can be a fibrous mass of roots that arise from the nodes in the stem, called adventitious roots. Monocots have adventitious roots,  whereas dicots have a radicle from which a root develops.

Leaves have more than one characteristic that help differentiate a monocot from a dicot. If the leaf has a stalk, then the plant is a dicot. But, in the case of a monocot plant, the leaf is sessile, which means it is attached directly by its base without a stalk.

Monocot flowers tend to have a number of petals or other floral parts that is divisible by three, usually three or six. Dicot flowers on the other hand, are likely to have parts in multiples of four or five (four, five, ten, etc.). This character is not always reliable, and is not easy to use in identification of some flowers with reduced or numerous parts.

Monocot plants normally have a weak stem, whereas dicots have a strong stem. Vascular tissues are seen as long strands and are called vascular bundles. In the dicot plant, the vascular bundles are arranged in a ring form, whereas in a monocot, these bundles appear scattered through the stem, with more of the bundles located towards the periphery (outer edge) of the stem than at the centre.

Note: There are some exceptions to this classification however, as some species of plants belonging to monocots can have characters belonging to dicots, since the two groups have a shared ancestry.

Let's have a look on different parts of monocot and dicot plants. 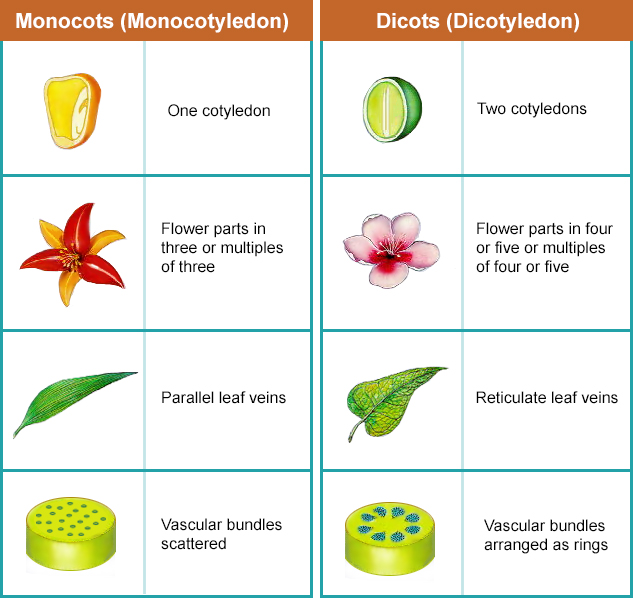