The kingdom Plantae consists of different types of plants that are eukaryotic, multicellular organisms having photosynthetic pigments and cell walls.

Thalophytes are the simplest plants and do not have a well-differentiated body design. The body design is called ‘thallus’ as it is unicellular and non-jacketed. The vascular system and embryo stage is absent in their life cycle.

The plants included in this group are commonly known as algae, usually found in water or in moist regions. The plants in this group do not bear flowers, but they contain chlorophyll and prepare their own food.

Spirogyra is a filamentous green algae that is seen in fresh water bodies such as ditches, ponds and lakes. It is commonly called water silk. Spirogyra measures approximately 10 to 100μm in width and may stretch centimetres long.

Each filament is unbranched and consists of cylindrical cells placed end to end. These cells have one or more beautiful spiral chloroplasts, so they appears dark green.

The cell wall is two layered and made up of cellulose and pectin. Pectin dissolves in water and makes the filament slimy to touch.

Fungus is a eukaryotic organism classified as a separate kingdom and is not grouped under plants, animals and bacteria. This kingdom includes microorganisms such as yeasts, moulds and mushrooms. Fungal cells have cell walls that contain chitin, unlike the cell walls of plants, which contain cellulose.

Fungi lack chloroplasts and are heterotrophic organisms, and so require preformed (previously formed) organic compounds as energy sources. These organic compounds have already been made by plants, bacteria, fungi, or other animals; they are 'preformed', so to speak, by those other organisms.

Agaricus is a fleshy saprophytic fungus with over 300 species and  contains both edible and poisonous species. It is found in wet and damp climates. It grows on wood and in humus-rich soil.

The upper part which is visible above ground is called basidiocarp. It consists of a fleshy cap called pileus. Horizontal groove-like structures called gills or lamellae are present on the lower surface of the cap. The gills bear club shaped basidia on either side, which contain spores called basidiospores. Below the cap is a stalk or stipe (stem) which has a ring-like structure called annulus. This gets cut off from the margin of the cap during its development.

Plants in this group have stems and leaves, but no roots. They have  root like structures called ‘rhizoids’. Rhizoids help the

plant to anchor itself to a surface, but they do not absorb nutrients from the soil as roots do in other plants.

Moss grows on moist brick walls, on sidewalks, and as thick mats on forest floors. It is green, erect and is differentiated into leaves, axis and rhizoids. The main body of an adult plant is called a gametophyte. The rhizoids that anchor the plant are multicellular and branched with oblique septa.

Mosses are bisexual. The same plant bears the female reproductive organ (archegonia) and male reproductive organ (antheridia). Mosses reproduce in a unique way. The first generation moss, the gametophyte, produces a sperm and an egg that come together and grow into the next generation sporophyte. The female branch of the older moss plants bears the sporophyte that has no chlorophyll and lives on a gametophyte.

The sporophyte dries and releases spores that grow into a new generation of gametophytes. The sporophyte is the organ for asexual reproduction and consists of a foot, seta and capsule. The capsule is a beak like structure found on top of a thin stalk and produces the spores. Mosses show alternation of generation between gametophytic and sporophytic generations though the plant has a gametophyte dominant cycle.

Pteridophytes are vascular plants. The plants in this group contain roots, stems and leaves, but do not produce flowers and seeds. The adult plant body is a saprophyte. It shows differentiation into true roots, stems and leaves. The stem is mostly herbaceous. Leaves may be small or large. Vascular tissues are present in all the vegetative parts of the plant body. Reproduction involves production of spores inside special structures called sporangia that can be found on the ventral surface of fertile leaves called sporophylls. Sporangia may sometimes be found in groups called sori.

Ferns are found in humid and shady places, both in tropical and subtropical climates. They can also be found in aquatic habitats. Ferns are vascular plants having xylem and phloem. Like all vascular plants, they have stems, leaves and roots.

The stem is short, stout and mostly an underground creeping rhizome. In some species the stem is above the ground and is erect and woody. From the adventitious buds on the stem arise large, compound leaves called fronds. Leaves are of three types:

Clusters of adventitious roots arise from the underside of the stem near each node. Ferns reproduce through spores, and have neither seeds nor flowers. Like all vascular plants, ferns have a life cycle that sees alternation of generations, although the plant has a sporophyte dominant cycle.

Gymnosperms are seed producing plants. The word gymnosperm comes from the Latin word ‘gymnospermos’ meaning ‘naked seeds’, which means the plants bear naked seeds which are exposed to the environment.Gymnosperm seeds develop either on the surface of scale or leaf-like appendages of cones, or at the end of short stalks. The cones are the reproductive organs of the plants. Gymnosperms do not have the ability to make flowers.

The Pine is a tall evergreen tree found mostly in hilly areas in tropical and temperate climates. It is a vascular plant having well developed xylem and phloem.

The adult pine has two types of leaves:

Male cones are borne in clusters in the axil of the scale leaves of the long branches. A mature cone is dark brown in colour and ovoid in shape. A male cone consists of numerous spore bearing leaves, the microsporophylls, that are arranged spirally on the central axis.

Each microsporophyll has a stalk, a broad lamina and a tip curved upwards to fit over the microsporophyll above it. It bears two sporangia on its lower surface. The sporangia are filled with numerous winged microspores. The wings help the pollen grains to be carried by the wind that reach the ovules (megasporangia) in the female cones.

A female cone is brown in colour, woody in structure and found in groups of 2 to 4 in the axil of the scale leaves of the long branches. Branches that bear male cones do not bear female cones. It contains 80-90 bract scales arranged spirally on the central axis. In the axils of each bract scale an ovuliferous scale is present, called the microsporophyll. It bears two ovules on the upper surface. The ovules contain eggs that are fertilised by the winged pollen grains released by the microsporangia of the male cone.

Angiosperms are flowering plants and are the most diverse group of land plants, with a vascular system. Angiosperms have stems, roots, and leaves. They produce seeds that are enclosed within a fruit. Angiosperms bear flowers that are reproductive organs. Flowering plants are divided into two major groups, or classes on the basis of the number of cotyledons present in the seed, the Monocots and Dicots. Monocot seeds have one cotyledon and dicot seeds having two cotyledons. The cotyledons are enclosed in an embryo. 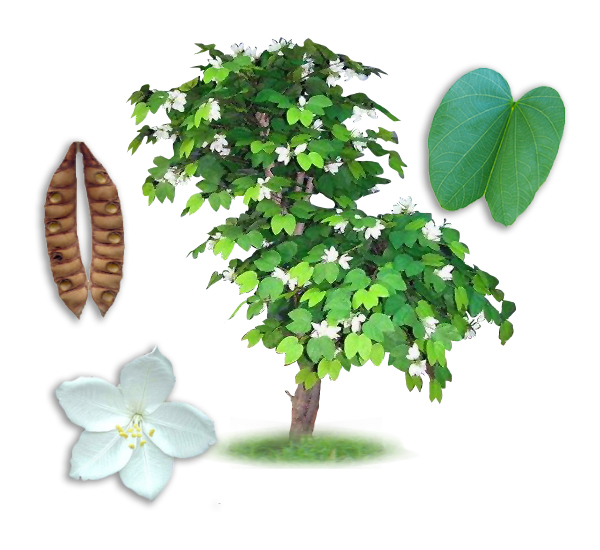 Bauhinia acuminata is a species of flowering plant native to tropical south eastern Asia. It grows two to three meters tall and is a semi-deciduous large shrub or small tree with white butterfly-like flowers. This shrub is drought tolerant. Bauhinia acuminata is very sensitive to cold winds.

Like the other Bauhinia species, the leaves are bilobed and shaped like an ox’s hoof. Its leaves are sessile and have a reticulate venation.

The flowers have five petals and so are pentamerous.

The seeds are enclosed inside the fruit. A member of the bean family, the orchid tree produces flattened brown woody legumes (pea shaped pods) with 4 to 6 seeds in each pod.