Our objective is to; 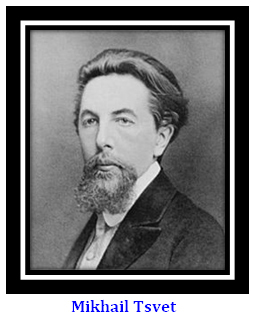 Are all organic componds pure?

No, most organic compounds obtained from natural sources and synthesised in laboratories are not pure. Various methods are used for the purification of organic compounds that are based on the nature of the compound and the impurity present in it. Among the various separation techniques, chromatography is one of the most important separation technique extensively used to separate mixtures into their components and the purification of the compounds.

The word chromatography originated from two greek words 'chroma' meaning 'colour' and 'graphine' meaning 'to write'. Chromatography means colour writing and it was first employed by a Russian scientist Mikhail Tsvet. This method was first used for the separation of coloured substances in plants.

Depending on the basic principle involved in chromatography, it is mainly classified into two.

In column chromatography, the stationary phase or adsorbent is a solid and the mobile phase is a liquid. The most commonly used stationary phases are silica gel and alumina. The mobile phase or eluent is a pure solvent or a mixture of solvents. It involves the separation of a mixture over a column of adsorbent packed in a glass tube called chromatography column. Chromatography column is a glass tube with diameter from 5 mm to 50 mm with length 5 cm to 1 m with a stopcork at the bottom. The mixture adsorbed is placed on the top of the adsorbent column packed in the chromatography column. An appropriate eluent is allowed to run down the column slowly. Depending upon the degree to which the components are adsorbed, complete separation takes place. The most readily adsorbed components are retained near the top and others come down to various distances in the column. 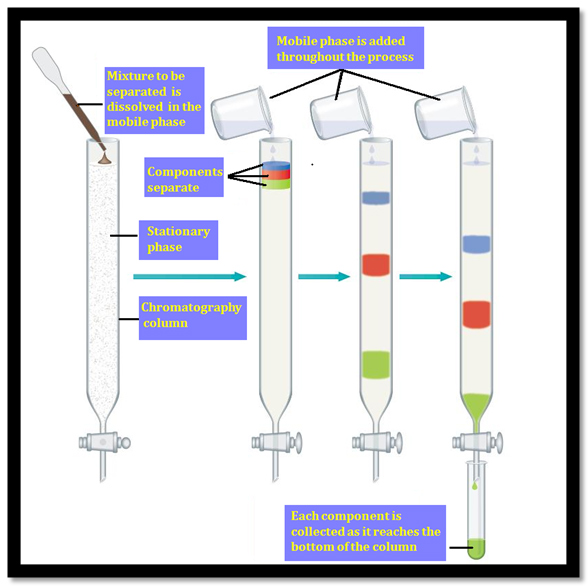 Thin layer chromatography is another type of adsorption chromatography, which involves the separation of a mixture of substances over a thin layer of an adsorbent coated on a glass plate. In this case, the stationary phase is a glass plate of suitable size coated with a thin layer of stationary phase usually silica gel or alumina. This plate is known as thin layer chromatography plate (TLC plate) or chromaplate. The solution of mixture to be separated is applied as a small spot about 2 cm above one end of the TLC plate. The glass plate is then placed in a closed jar (chromatography chamber) containing the mobile phase. As the mobile phase rises up the plate by capillary action, the components of the mixture move up along with the solvent to different distances depending on their degree of adsorption and separation takes place. The relative adsorption of each component of the mixture is expressed in terms of its Retardation factor (Rf) (Retention factor).

What is Retention factor (Rf value)?

How do we detect the components on the TLC plate? 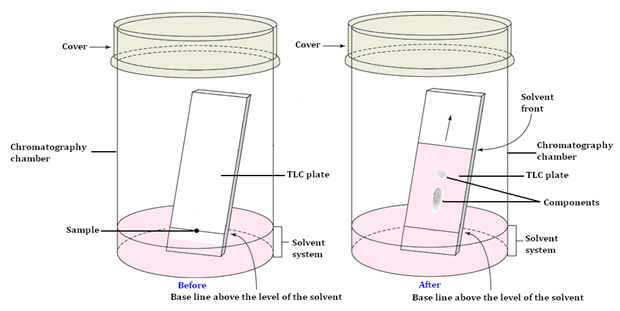 In paper chromatography, the stationary phase is a special quality paper called chromatography paper. Mobile phase is a solvent or a mixture of solvents. A solution of the mixture is spotted on a line about 2 cm above from the bottom of the paper, called original line or base line and then suspended in a chromatography chamber containing suitable solvent. The solvent rises up the paper by capillary action and flows over the spot. The paper selectively retains different components according to their differing partition in the two phases. The paper strip so developed is called Chromatogram. The spots of the separated coloured compounds are visible at different heights from the position of initial spot on the chromatogram. The spots of the separated colourless components may be observed either under ultraviolet light or by the use of an appropriate spray reagent. The distance travelled by the solvent from the original line is called solvent front. The relative adsorption of each component of the mixture is expressed in terms of its Retardation factor (Rf) (Retention factor).