Which was the first organic compound to be synthesised in the lab and by whom?

What is organic synthesis?

Synthesis of some simple organic compounds.

It is prepared from benzaldehyde and acetone by Claisen-Schmidt Reaction.

Claisen Schmidt Reaction is a condensation reaction between an aromatic aldehyde and an aliphatic ketone in the presence of a strong base like NaOH leading to unsaturated ketone. In this reaction, two molecules of water are eliminated.

In the preparation of Dibenzal acetone, two moles of benzaldehyde condenses with one mole of acetone. The chemical reaction is represented as follows;

The direct preparation of p-nitroacetanilide from aniline using a nitrating mixture is very difficult. This is because, in the presence of the nitrating mixture, the amino (-NH2) group of aniline is oxidised to the nitro (-NO2) group and forms nitro benzene.

2-Naphyhol aniline dye is an azo compound and it is a scarlet red dye. It is mainly used for dyeing textiles. It contains the characteristic group. Azo compounds have an extended conjugated system and are often coloured and are used as dyes. These compounds are prepared by the reaction known as coupling reaction. 2-Naphthol aniline dye is prepared from aniline.

Aniline is first converted to diazonium salt by treating it with nitrous acid at >5oC. Nitrous acid is produced in the reaction mixture by the reaction of sodium nitrite with hydrochloric acid. The procession of conversion of aromatic primary amines into diazonium salt is known as diazotisation. This benzene diazonium compound undergoes a coupling reaction with 2-Naphthol to form 2-Naphyhol aniline dye. 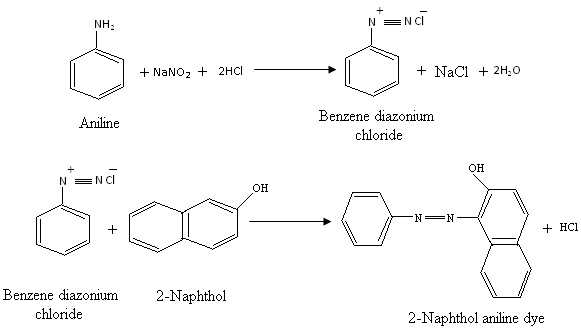