To show that acids, bases, and salts are electrolytes.

Acid, any substance that in water solution tastes sour, changes the colour of specific indicators (e.g., reddens blue litmus paper), reacts with some metals (e.g., iron) to liberate hydrogen, reacts with bases to form salts, and promotes specific chemical reactions (acid catalysis). Examples of acids include the inorganic substances known as the mineral acids—sulfuric, nitric, hydrochloric, and phosphoric acids—and the organic compounds belonging to the carboxylic acid, sulfonic acid, and phenol groups. Such substances contain one or more hydrogen atoms that, in solution, are released as positively charged hydrogen ions.

In chemistry, any substance in water solution is slippery to the touch, tastes bitter, changes the colour of indicators (e.g., turns red litmus paper blue), reacts with acids to form salts, and promotes specific chemical reactions (base catalysis). Examples of bases are the hydroxides of alkali and alkaline earth metals (sodium, calcium, etc.) and the water solutions of ammonia or its organic derivatives (amines). Such substances produce hydroxide ions (OH-) in water solutions.

In chemistry and physics, an electrolyte is a substance that conducts electric current by dissociating into positively and negatively charged particles known as ions, which migrate toward and are generally discharged at the negative and positive terminals (cathode and anode) of an electric circuit, respectively. Acids, bases, and salts are the most common electrolytes, which ionise when dissolved in solvents such as water or alcohol. Many salts, such as sodium chloride, function as electrolytes when melted in the absence of a solvent, while some, like silver iodide, are electrolytes even when solid. 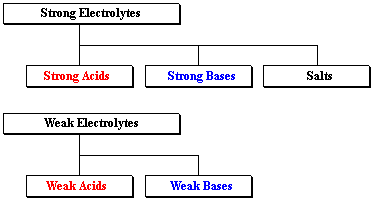 The movement of electrons plays a significant role in electrical conductivity. Metals are good electrical conductors because they allow electrons to travel across the whole substance. As a result, electrons flow through metals like a "sea of electrons." In comparison, distilled water is a poor electrical conductor because relatively little electricity travels through it. Strong electrolytes are highly ionised compounds. Strong electrolytes are acids and salts that ionise (dissociate or separate) in a solution. The ions conduct the electric charge through the solution, resulting in the generation of an electric current. If the current is significant, it will illuminate one or both LEDs on a conductivity metre.
Weak electrolytes are slightly ionised compounds. Because weak acids and bases do not completely dissociate in solution, they are classified as weak electrolytes. Non-electrolytes are substances that do not conduct an electric current. Non-electrolytes do not ionise and do not contain mobile ions. A conductivity meter's LEDs will not light up because no ions convey the electric current.