To study the static characteristic of a transistor (Common Emitter Configuration)

A transistor is a semiconductor device used to amplify or switch electronic signals and electrical power. It is composed of semiconductor material with at least three terminals for connection to an external circuit. A voltage or current applied to one pair of the transistor's terminals changes the current through another pair of terminals. Because the controlled (output) power can be higher than the controlling (input) power, a transistor can amplify a signal.

The circuit diagram for npn transistor is shown below.

Keeping the collector- emitter (VCE) voltage constant, the base- emitter (VBE) voltage is increased from 0 and the corresponding base current (IB) values are noted. This is repeated for increasing values of VCE. The family of curve obtained by plotting IB against VBE for each VCE value is called input characteristics. 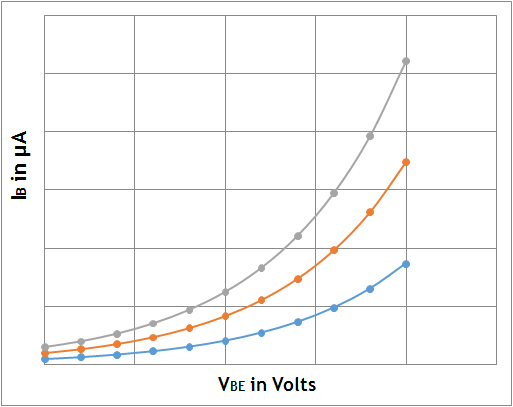 By keeping the base current (IB) constant, collector- emitter (VCE) voltage is varied and the corresponding IC values are obtained. This is repeated for increasing values of IB. The family of curves obtained by plotting IC against VCE for each value of IB is called output characteristics. Students will be able to do the experiment, once they understand the procedure.