To draw the I-V characteristic curve of a p-n junction diode in forward bias and reverse bias.

Semiconductors are classified as;

Intrinsic semiconductors :Pure semiconducting materials like crystalline form of germanium and silicon, with equal concentration of electrons and holes.

Extrinsic semiconductors :Semiconducting material with the addition of suitable impurity atoms through doping. 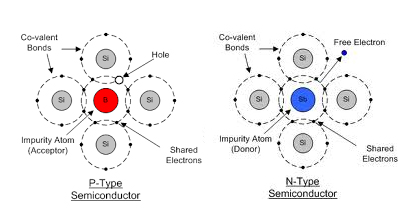 Semiconductor diode is simply the combination of a p-type and an n-type material. It is formed by doping half of the silicon crystal with trivalent impurity (p-type) and the other half with pentavalent impurity (n-type). It has the characteristics of passing current in one direction only. If there is no voltage is applied across the junction, electrons will diffuse through the junction to p - side and holes will diffuse through the junction to n - side and they combine with each other. Thus the acceptor atom near the p - side and donor atom near n – side are left unutilized and is called the depletion layer. An electron field is generated by these uncovered charges which called the barrier potential. This opposes further diffusion of carriers and is known as depletion region.

Biasing in general means the application of dc voltage across the terminals of a device for a particular operation. Two types of biasing are possible in a p-n junction diode. They are; 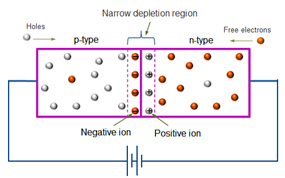 Forward biasing occurs when the positive end of the diode is connected to the positive terminal of the battery, and its negative end to the negative terminal of the battery. Here, majority carriers from both sides move towards and cross the junction and current flows through the junction. This current is known as the forward current and is the order of 10-3 A. The size of the depletion layer decreases in forward biasing. 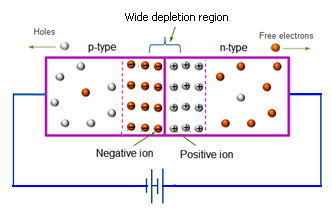 Characteristics of a p-n junction diode 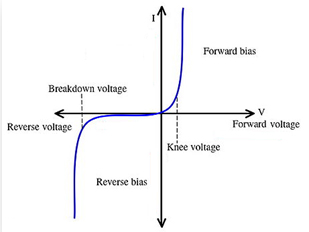 The forward characteristics of a diode is non linear. The forward current increases slowly in the beginning and shows a sudden rise at a certain value of forward voltage. This voltage is known as the threshold voltage or Knee voltage. This is because the resistance is very low in forward biased condition. The current in the reverse bias is due to the flow of minority carriers. The reverse current shows a sudden increase at a particular region. The corresponding voltage is termed as the reverse breakdown voltage.