The metre bridge, also known as the slide wire bridge consists of a one metre long wire of uniform cross sectional area, fixed on a wooden block. A scale is attached to the block. Two gaps are formed on it by using thick metal strips in order to make the Wheat stone’s bridge. The terminal B between the gaps is used to connect galvanometer and jockey. 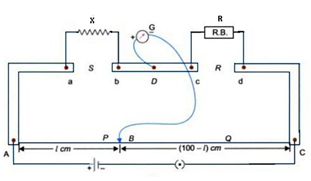 A resistance wire is introduced in gap S and the resistance box is in gap R. One end of the galvanometer is connected to terminal D and its other end is connected to a jockey. As the jockey slides over the wire AC, it shows zero deflection at the balancing point (null point).

If the length AB is

The specific resistance or resistivity of the material of the wire can be then calculated by using the relation,

; Where L be the length of the wire and r be its radius.