Our aim is to determine the Young’s modulus of elasticity of the material of a given wire using Searle’s apparatus.

Before we move ahead, do you know what a Searle’s apparatus is?

Searle’s apparatus consists of two metal frames F1 and F2. Each frame has a torsion head at the upper side and a hook at the lower side. These frames are suspended from two wires AB and CD of same material, length and cross-section. The upper ends of the wires are screwed tightly in two torsion heads fixed in the same rigid support. A spirit level rests horizontally with  one end hinged in the frame F2. The other end of the spirit level rests on the tip of a spherometer screw, fitted in the frame F1. The spherometer screw can be rotated up and down along a vertical pitch scale marked in millimeters. The two frames are kept together by cross bars E1 and E2. 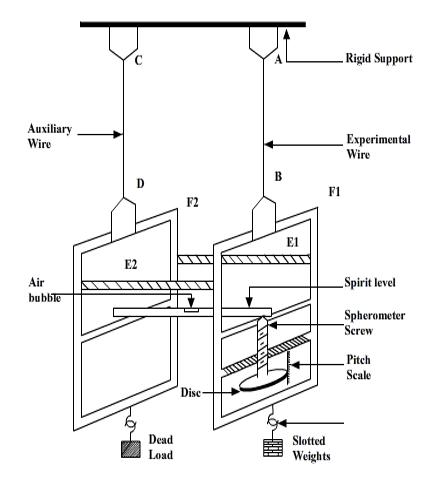 Do you know Searle’s apparatus works on the principle of Hooke’s law?

Hooke’s law can be expressed in terms of stress and strain. Stress is the force on a unit area within a material that develops as a result of the externally applied force. Strain is the relative deformation produced by stress.

If a wire of length L and radius r be loaded by a weight Mg and if l is the extension produced,

Where,
L – Length of the wire
l- Extension for a load M
r- Radius of the wire
g- Acceleration due to gravity
M- Mass added in the hanger