To verify the laws of reflections of sound. 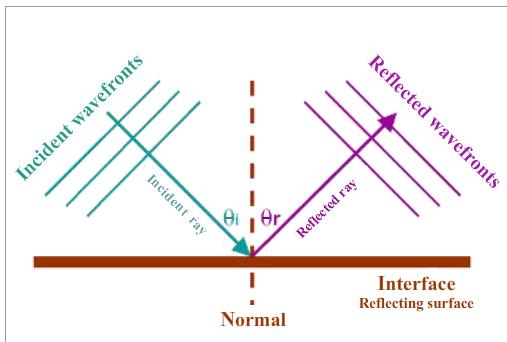 Reflection is the change in direction of a wavefront at an interface between two different media so that the wavefront returns into the medium from which it originated. Common examples include the reflection of light, sound and water waves.

Do you know how sound propagates?

Sound propagates through air as a longitudinal wave. The speed of sound is determined by the properties of the air, and not by the frequency or amplitude of the sound.  If a sound is not absorbed or transmitted when it strikes a surface, it is reflected. The law for reflection is the same as that of light, ie., the angle of incidence of a sound wave equals the angle of reflection, just as if it were produced by a 'mirror image' of the stimulus on the opposite side of the surface.

How do we describe the reflection of sound?

When sound travels in a given medium, it strikes the surface of another medium and bounces back in some other direction, this phenomenon is called the reflection of sound. The waves are called the incident and reflected sound waves.

What are incident and reflected sound waves?

Let’s look at the two laws of reflection

The following two laws of reflection of light are applicable to sound waves as well:

Student will understand the First and Second Laws of Reflection.

First Law of Reflection: The incident wave, the reflected wave, and the normal at the point of incidence lie on the same plane.

Law of Reflection: The angle of incidence is equal to the angle of reflection.